At Google’s hardware event this morning, the company introduced a new voice recorder app for Android devices which will tap into advances in real-time speech processing, speech recognition and A.I. to automatically transcribe recordings in real-time as the person is speaking. The improvements will allow users to take better advantage of the phone’s voice recording functionality, as it will be able to turn the recordings into text even when there’s no internet connectivity.

This presents a new competitor to others in voice transcriptions that are leveraging similar A.I. advances, like Otter.ai, Reason8, Trint, and others, for example.

As Google explained, all the recorder functionality happens directly on the device — meaning you can use the phone while in airplane mode and still have accurate recordings.

“This means you can transcribe meetings, lectures, interviews, or anything you want to save,” said Sabrina Ellis, VP of Product Management at Google. 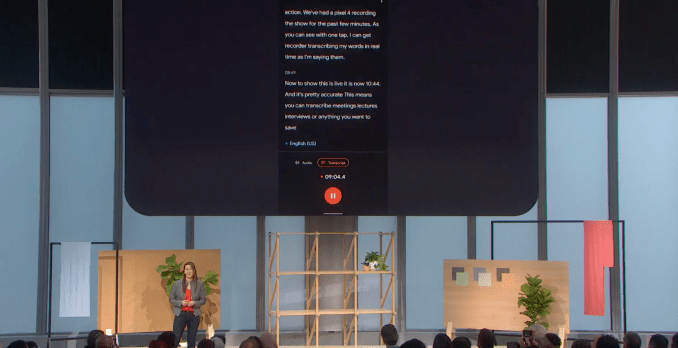 The app was introduced among a series of improvements coming to Google’s new smartphone, the Pixel 4.