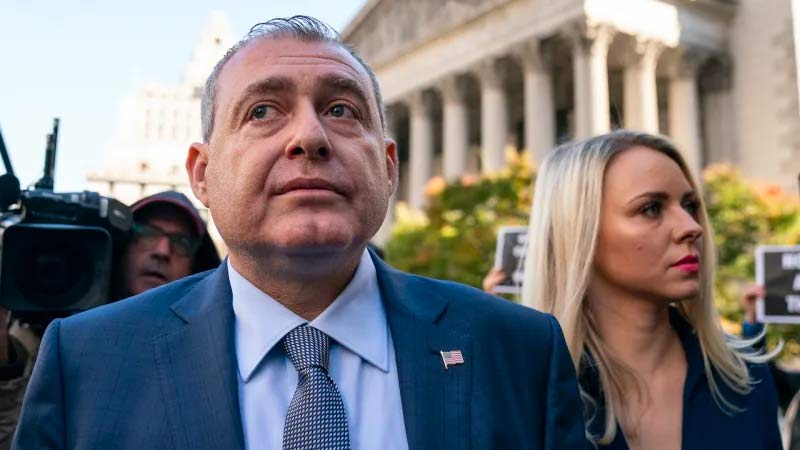 Have you heard the news about Donald Trump, Rudy Giuliani, and the company Fraud Guarantee? It’s even dumber than you can imagine.

Rudy Giuliani, personal attorney to President Trump, is in hot water after his associates were arrested for alleged illegal campaign finance hijinks. The two men at the center of the scheme, Lev Parnas and Igor Fruman, became the butt of a thousand jokes on late night TV when it was revealed that Parnas had a real company called Fraud Guarantee. But there may have been a reason for the absurd name, according to a new report. Parnas was trying to make sure that anyone who Google searched his name with the word “fraud” got only positive results.

The bizarre revelation comes from a new article in the Wall Street Journal about Parnas’s shady business practices. Parnas allegedly ran a penny-stock scam called Edgetech International that distributed a gadget called Edge, billed as the “Fastest Hand-held Internet Access Device,” in a press release from 2008. Parnas was also sued in federal court in 2011, according to the Wall Street Journal, over a loan he received that was supposed to finance a movie. The movie, it seems, never got made.

Enter Parnas and his company, Fraud Guarantee. Google results for the words “fraud” and “Parnas” likely brought back some pretty shady stuff before he started the company. But with his new company, a search like that would presumably show his strange new business on the first page of results.

From the Wall Street Journal:

Messrs. Parnas and Correia set up Fraud Guarantee in a Boca Raton office park. Mr. Parnas picked the name in part to clean up his Google search results, ensuring that the word “fraud” and his own name would be paired in a positive light, said people familiar with the matter.

Some associates questioned the name, but it worked: Negative search results about the bridge loan and Edgetech soon dropped in Google’s rankings, one of the people said.

So there you have it. Comedians have been making fun of Fraud Guarantee nonstop, but there was actually a reason for the name.

Obviously Parnas wasn’t the first genius to figure out that you can juice Google results, but this may have been the dumbest one we’ve ever heard. That is until Peter Thiel starts a company called Young Blood Import-Export.