Something You Probably Don’t Know About Google Review Likes

Last time we counted, there were upwards of 35 components to a single Google Business Profile(GBP). Hotel panels, in and of themselves, are enough to make one squeal, but even on a more “typical” GPB, it’s easy to overlook some low-lying features. Often, you may simply ignore them until life makes you engage.

Recently, I heard a story from a local SEO that came to me with a curious real-life anecdote, in which their client was pressuring the agency to have all their staff hit the “like” button on all of the brand’s positive Google reviews. Presumably, the client felt this would help their business in some manner. More on the nitty-gritty of this scenario later, but at first, it made me face that I’d set this whole GBP feature to one side of my brain as not terribly important.

Fast forward a bit, and I’ve now spent a couple of days looking more closely at the review like button, its uses, abuses, and industry opinions about it. I’ve done a very small study, conducted a poll, and spoken to three different Google reps. Now, I’m ready to share what I’ve learned with you.

Crash course: Rolled out in 2016, this simple function allows anyone logged into a Google account to thumbs-up any review they like. There is no opposite thumbs-down function. From the same account, you can only thumb up a single review once. Hitting the button twice simply reverses the “liking” action. Google doesn’t prevent anyone from hitting the button, including owners of the business being reviewed.

At a glance, do Google review likes influence anything? 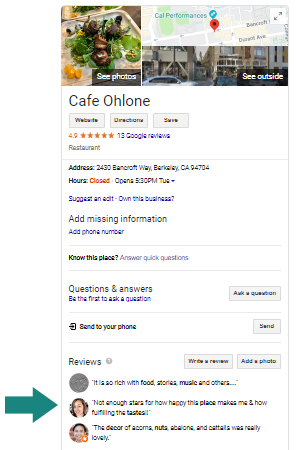 So here’s what happens after someone plugged 20 totally random local businesses into a spreadsheet, with 60 total reviews being highlighted on the front interface of the GBP. Google highlights just three reviews on the GBP and I wanted to know two things:

This study was very small, and should certainly be expanded on, but here’s what I saw: 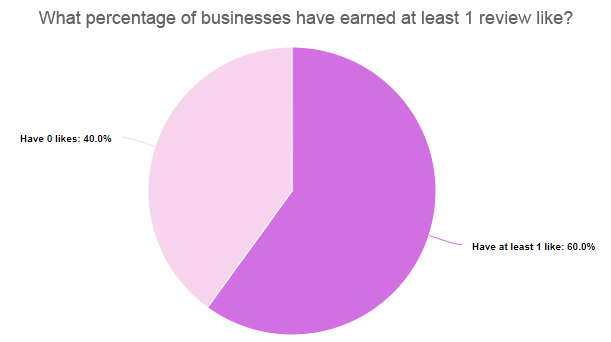 60 percent of the brands had earned at least one like somewhere in their review corpus. 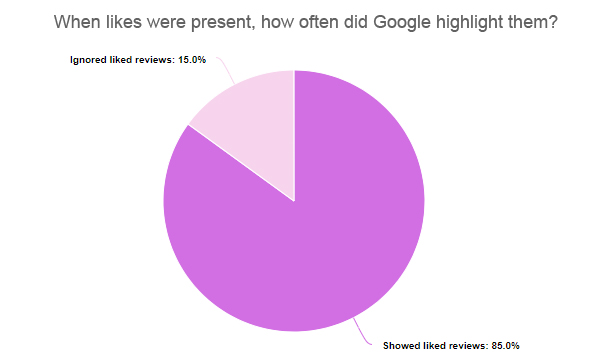 At a glance, I’d say it looks like a brand’s liked reviews may have an advantage when it comes to which sentiment Google highlights. This can be either a positive or negative scenario, depending on whether the reviews that get thumbed up on your listing are your positive or negative reviews.

And that leads us to…

And that leads us to…

Google’s guidelines for the use of the review likes function

But don’t get too excited, because it turns out, no such guidelines exist!. Though it’s been three years since Google debuted this potentially-influential feature, I’ve confirmed with them that nothing has actually been published about what you should and shouldn’t do with this capability. If that seems like an open invitation to spam, I hear you!

So, since there were no official rules, I had to hunt for the next best thing. I was thinking about that SEO agency with the client wanting to pay them to thumb up reviews when I found a Twitter poll on the subject:

Unsurprisingly, given the lack of guidelines, 15 percent of 111 respondents had no idea whether it would be fishy to employ staff or markers to thumb up brand reviews. The dominant 53 percent felt it would be totally fine, but a staunch 32 percent called it spam.

Guidelines for use of the review likes function

Going forward with what we’ve learned, here’s what I would recommend:

How big of a priority should review likes be for local brands?

In the grand scheme of things, I’d put this low on the scale of local search marketing initiatives. As I mentioned, I’d given only a passing glance at this function over the past few years until I was confronted with the fact that people were trying to spam their way to purchased glory with it.

If reputation is a major focus for your brand (and it should be!) I’d invest more resources into creating excellent in-store experiences, review acquisition and management, and sentiment analysis than I would in worrying too much about those little thumbs. But, if you have some time to spare on a deep rep dive, it could be interesting to see if you can analyze why some types of your brand’s reviews get likes and if there’s anything you can do to build on that. I can also see showing positive reviewers that you reward their nice feedback with likes, if for no other reason than a sign of engagement.